I waited a long time to see the sunrise this morning. I sat atop my car, on the top of a six-floor concrete parking deck in downtown Austin, Texas, braving the 57-degree temperature in jeans and a gray sweater. The metal of the car’s roof felt cold through my jeans, an even more acute sensation in the dark. The only thing I could see was the outline of the buildings that make up the Austin skyline, and a handful of still-twinkling stars anchored in the sky over my head. The deep ocean blue of space faded slightly to a lighter blue as it descended toward the horizon, with just a hint of light behind the buildings, indicating the direction of the eventual sunrise.

Around 7, the light had increased slightly, but I was growing colder in the early morning air. I could see my breath as each lungful of carbon dioxide escaped my lips. All around me, the sky was clear, with only a small scattering of cotton candy pink clouds to the north, humbly collecting and reflecting the distant sun’s hue. By 7:10, the sky to the west was beginning to glow a soft purple. The northern clouds were fading from pink to nearly white. Small flocks of birds began to fly overhead, going about their early-morning business, stopping for short breaks in the trees directly to the east of the parking garage, whose scant tops were nearly even with my line of sight. Seven-fifteen came and went, then 7:20.

I was shivering now, scanning the horizon frequently in search of the precise location where the sun might be coming up, eager to feel its warmth. Two buildings, each about 15 stories tall, fell right in line with where I suspected the sun might rise, and the slim space between them began to glow the hot orange of an imminent sunrise. I found myself checking the tops of the tallest buildings, where the rays of light would fall first when the sun finally broke the horizon. A single jet airplane crossed the horizon, in the very far distance, and for a brief moment, its tail caught fire with the light of the sun. I felt sure I would see the orb at any moment, and wondered how, after all this waiting, I would avoid looking directly at its brilliance, and I worried about the effect it would have on the health of my eyes. I looked at my watch: 7:25. I took a deep breath and noted that I could now easily see the flecks of dirt and debris on the top of my car. The flocks of birds had increased their membership, with fifteen instead of five in each fold. I thought of the nursery rhyme, Sing a Song of Sixpence: Sing a song of sixpence / a pocket full of rye / four and twenty blackbirds / baked in a pie. I looked again at my watch; it was 7:30. The pre-rise colors of pink and purple had taken their leave; the inky color of space had been chased away. The sky had the appearance of day; for all intents and purposes, the sun had risen. My own eyes had still not beheld the sun, but it was clear the momentous occasion had passed. At 7:35, after 45 minutes of cold and anticipation, I decided that one of those two buildings had blocked my view, and that though I hadn’t seen it do so, the sun had, in fact, risen.

With a sigh, I slid off the top of my car, hung my backpack on my shoulders and began my descent to the street below. I thought about looking for God, and how it’s like waiting for the sunrise. During the times when I can’t see Him, I look to the places where I expect to find evidence of His presence, like looking for sunlight on the tops of buildings, or on the tails of planes. And, like the sun, its glory hidden behind a building, God is present, despite the circumstances that may block my view.

As I moved on into the day, fully confident that the sun was rising above the city, so too I step out in faith, knowing full well that God is moving, going before me, standing behind.

Where can I go from your Spirit?
Where can I flee from your presence?
If I go up to the heavens, you are there;
If I make my bed in the depths, you are there.
If I rise on the wings of the dawn,
If I settle on the far side of the sea,
Even there your hand will guide me,
Your right hand will hold me fast.
If I say, “Surely the darkness will hide me
And the light become night around me,”
Even the darkness will not be dark to you;
The night will shine like the day,
For darkness is as light to you. 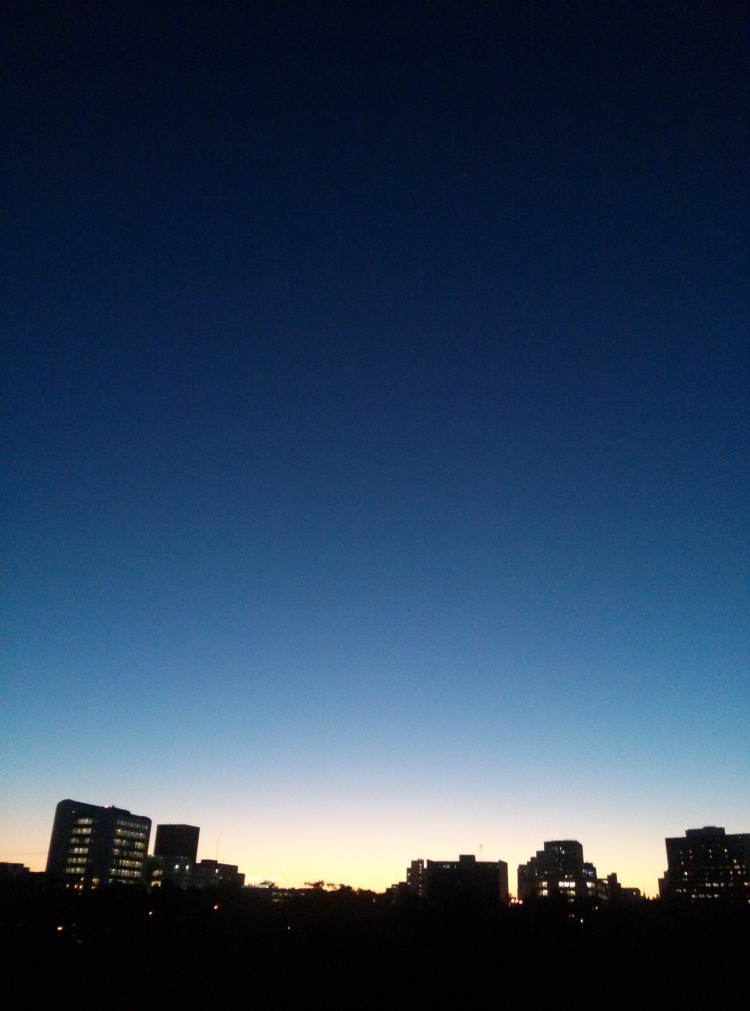